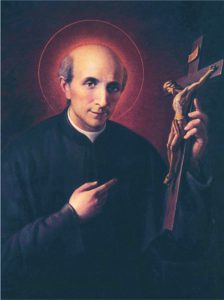 St. Vincent Pallotti was a descendent from the noble family of Pietro Paolo Pallotti & Maria Maddelena De Rossiin Rome. He completed his early studies at the Pious Schools of San Pantaleone. Then, he proceeded for his further studies to the Roman College. At the age of sixteen, he resolved to become a priest and after the completion of formation, he was ordained a priest on May 16, 1818. After his ordination, he pursued his studies and earned a doctorate degree in Sacred Theology. Vincent Pallotti is described as a person of a small of stature, with ordinary physical built, with big blue eyes and penetrating glance. He was appointed as an assistant professor at the Sapienza University but soon he resigned from his post so that he could devote himself to pastoral work. Vincent Pallotti worked selflessly looking after the poor in the urban areas of the city for the most part of his life. He organized schools for shoemakers, tailors, coachmen, carpenter, and gardeners so that they could better work at their trade, as well as evening classes for young farmers and unskilled workers. He soon became known as a “Second St. Philip Neri”.